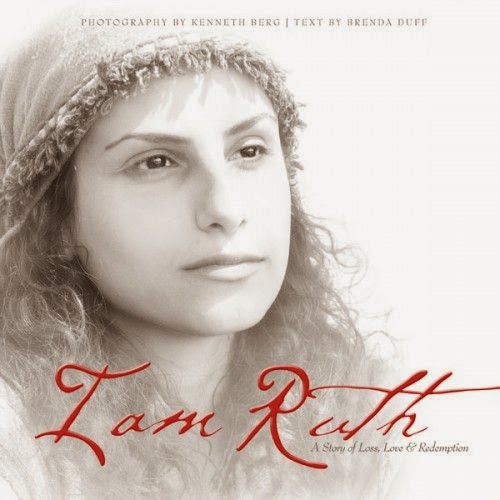 Hunger in Israel is the reason why one man from Bethlehem with his wife Naomi and two sons move to Moab. But even there, in spite of abundance of bread, they not well off. The husband of Naomi dies and both her sons marry with women from Moab. Then the two of them also die and Naomi is left with two widowed daughters in law instead of grandchildren. One widow is left with two more like her. 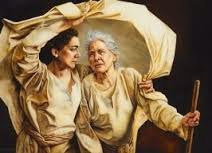 This is one happy beginning! But if you do not know the book of Ruth, please do not give up just yet – it will get much better.

Sometime, after all these deaths, Naomi hears that, and I quote:

THE LORD HAD VISITED HIS PEOPLE AND GIVEN THEM FOOD. She therefore decides to return home. Somewhere on their way back, thinking about things, she turns to both daughters in law and tells them to return home! Let God reward you for your kindness, may you both find husbands again. Please note that she wishes well to both of them. And both of them still want to go with her! And I think it is not only because of levirate laws, which gave them the right to marry the sons of Naomi in the future. Please do not consider these rules to be restrictions, but rather a protection of women. Being a widow is difficult even today, but we cannot really compare it to what was the situation then. 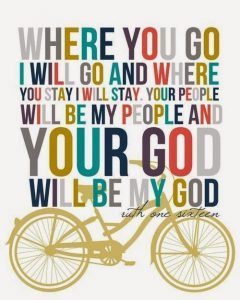 Naomi has an interesting view over herself. Other people in her place would complain about God, but she speaks of her bitterness.

However, something is not (we would say) quite in line with the “church rules”. When your husband dies followed by your two sons, it is clear that this cannot be a blessing! I do not want to discuss something I am not familiar with, but I can still wonder out loud. Was the decision to move to Moab right? I know that unlike Israel they did not suffer from hunger, but … In Deuteronomium, for the rules on the protection of purity and gathering of people, it is written: SHALL EVER ENTER THE ASSEMBLY OF THE LORD, BECAUSE THEY DID NOT MEET YOU WITH FOOD AND WATER ON THE WAY WHEN YOU CAME OUT OF EGYPT, AND BECAUSE THEY HIRED AGAINST YOU BALAAM THE SON OF BEOR FROM PETHOR OF MESOPOTAMIA, TO CURSE YOU. I am just saying that even the Egyptians got away better because – regardless of everything – Israelis were guests in their country. But I’m not here to analyse decisions of which I know little. Surely there was something not right about it. And I am not sure if it was Naomi´s fault, although she is taking the blame for it. LORD’S HAND HAS TURNED AGAINST ME!. That does not sound good. Naomi seems to think that the blessing has somehow faded in her life. I think this is one of the reasons why she does not want the daughters in law around her. She obviously likes them. She probably feels that she will not be able to bring anything good to their lives.

They both still want to stay anyway. With their mother in law going to a foreign country. Finally, after long persuasion, Orpah leaves. Please do not blame her! She got an offer and she heard from her mother in law, why it would be better for her and she leaves without any hard feelings. She receives a blessing from her mother in law. I have no reason not to believe that Orpah was well off, that Lord God made up for everything and that the words of blessing became reality in her life. I am just thinking out loud – how many mothers in law do bless their daughters in law? No, I do not mean “help” with the cooking and other “kind” activities. 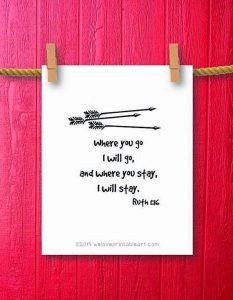 Orpah leaves with the blessing. And Ruth remains.

By the way, I do not think that Ruth stayed with her mother in law just because she had no place to go, or because she was not on good terms with her parents or any similar explanations that may come to mind of any daughters in law when they are angry with their mothers in law. Even if you try to say that this decision was not based on the love of the daughter in law to her mother in law, I can only disagree. I do not see any reason for that! Here for example – not only Ruth, but also Orpah did not want to leave! Apparently Naomi was doing something very wise. And we will get to some other reason later. Is it really so hard to believe that the daughter in law can be friends with her mother in law? I know… I can hear quite loudly about half of my girlfriends now. Girls, I know. I’m really glad that I’m not in your shoes.

Female friendships are generally a very strong thing. I remember one episode of Grey’s Anatomy where Christina explains how very close she is with her friend Meredith. If I killed someone and wanted to get rid of the body, I would definitely call her, she says. Okay – an extreme example. But it sums up pretty much of it. I remember this example very well and I know exactly who I would call.

What may the problem be that the friendship between a daughter in law and a mother in law is such a rarity? Hmm. There are women who get along with their spouses just so so … psychologists may say something about unfulfilled emotional needs or something. Such women are then often (not always, but often) fixed to their sons. More than would probably be considered fine and healthy. That is why all the women’s magazines do not recommend dating mama’s baby boys … and surprisingly, they are quite right about it. They are mothers who see the motherhood as their main task in life and without a sense of usefulness they feel somewhat lost. If they are Christian, they should remind themselves what is their main value and rarity. For this is a bit off. There are even mothers who claim to their daughters in law: you do not know my son as I do! I’m a little bit constraint. As the Hebrew word “to know” is used as a term for sexual intercourse, this statement is really a bit inappropriate. This is not only about sex. Hebrew language is very wise. Nobody knows their husbands as their wives, not even their mothers.

I guess enough of that. Thank God, Naomi was not like one of those mothers. It is why she had a good relationship with her daughter in law  and why she got into the genealogy of Jesus. If we were to be completely fair, the text could read by Ruth, daughter in law of Naomi…

One additional short note to conclude this chapter. How not to be a mother fixed to a son? Or not being fixed on anyone else? Simple. Fix yourself onto God. What else is there to resolve?