We are in a time when the kingdom of Israel was strong, growing and prosperous. It was blessed, strong and protected. It was led by King David, who was always trying to strengthen his influence, guard its borders and dispose of all enemies. Even at the time of our story he sends his troops into battle. He remains in its capital and addresses other important things. 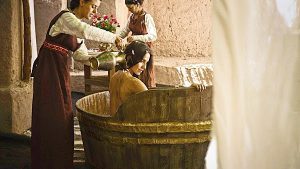 One evening, when he gets out of his bed and walks on the roof of the king’s house he sees a pretty woman bathing. The biblical description is rather short but let´s try and imagine it a little more! Maybe it was sunset and everywhere around a soft, quiet light, in reflection of which all are a little nicer … maybe it was dusk and the woman’s skin glistened in the reflection of the red sky. And maybe it was dark and what David saw was the silhouette and flashes of beautiful woman’s body, her hair, her graceful movements and her eye-catching charm. Perhaps for a moment he stood speechless from this beauty that appeared before his eyes. He perhaps held his breath and perhaps his heart was beating a little faster. Beautiful and charming moment… something that is right in front of him, charming and attractive and he only just needs to reach out and ask… and he will get what he wants.

Damn! Everyone around you says how you should listen to your heart and how you should not go against your desires and let your feelings lead you. But if you take this advice too literally, you can completely destroy everything beautiful. Just like David. Watch how fast things go south!

He asks: Who is that woman? He has her brought and sleeps with her. He assigned a name to a body but did not connect the name with her husband. Yes, this is Bathsheba, Uriah’s wife. Whose wife? Do I even care? No. Because I see something beautiful, I want it and I’ll take it! Not a word, not a hint that Bathsheba was unwilling.

David sleeps with her that night. The Old Testament has more terms for sex and this certainly is not one of those top ones – but more on that some other time. Bathsheba returns home and no one would probably speak about it if Bathsheba did not become pregnant. Even that would not be a problem if her husband was at least home. So David’s has Uriah brought in front of him and the husband of Bathsheba comes to stage for the first time. 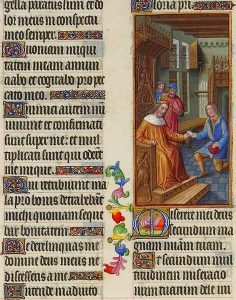 At the time when I knew almost nothing about the Bible, the name Uriah did not sound right. And later, when I learned about the Bible a little more I have to say it sounded even worse. Why? I do not know. One might ask why so many boys are nowadays called David, but none of them is Uriah.

Because, I have to say, Uriah is great! Seriously. What we read about him is great. His name means Yahweh is my light or flame of God. He was not an Israelite; he came from a minority which lived in the middle of Israel before the times of Abraham. The Slovak translation of the Bible speaks of him as “Chetej” or “Chetit”. In English it is Hittite. Despite his origin he was accepted in the Israeli army and he was not just anyone! Uriah was an officer and belonged to the group of fighters which were closest to David. They were with him when David was still out of favour with the previous king – Saul, before whom David had to run away and hide. Thanks to these soldiers who were closest to David, he was not all by himself. Look it up with your search engine: David’s Mighty Men or David’s Mighty Warriors or Gibborim. I was not able to find a Slovak equivalent or a more specific description. It´s a pity. There were about thirty-seven of them but we do not know that for sure. Even in the Bible there are two not quite the same lists of these fighters. But Uriah the Hittite is in both of them.

This Uriah comes back home from battle. He is summoned to King David and answering his questions tells how the current situation on the battlefield looks like. I am not sure about David’s concentration. I rather think that he could not wait to send Uriah home. We all understand how the night of husband, who was a long time without his wife, would look like? David was counting on that specifically. If that was the case, one would ever know that the father of the child of Bathsheba was not her husband. But Uriah shows his character and says: THE ARK AND ISRAEL AND JUDAH ARE STAYING IN TENTS, AND MY COMMANDER JOAB AND MY LORD’S MEN ARE CAMPED IN THE OPEN COUNTRY. HOW COULD I GO TO MY HOUSE TO EAT AND DRINK AND MAKE LOVE TO MY WIFE? AS SURELY AS YOU LIVE, I WILL NOT DO SUCH A THING!

Well, now I’ll tell you something from my heart. David could have been the most important king of Israel, he may have done quite a lot for the country, he may have written beautiful psalms and all that, but even if he put would transform himself into a Rubik’s Cube, he never deserved such an ally and friend as Uriah! 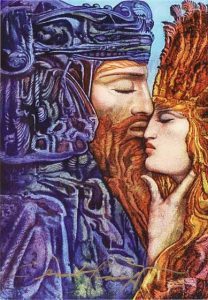 So Uriah remains with David who even gets him drunk, but he does not leave to go home anyway. He remains with David’s servants day and night. Regardless of all – he is a loyal soldier. The more faithful Uriah is in his service, the more cowardly David becomes. In how he can cover what happened. Soldiers depend with their lives on each other. They must rely on each other, because without it and without trust it would be like fighting alone. A lone warrior is a dead warrior. Uriah´s trust in David is the same as before he became king. It is the same as when they fled from Saul’s anger, which was really not simple. David, however, sends a letter to his commander with clear orders. Put Uriah into the fiercest fighting so he has no chance of getting out alive. For the next siege Uriah is sent to the front line to fight in the fiercest action and David’s wish is fulfilled. Uriah the Hittite dies in battle.

What David did was incredibly vile!